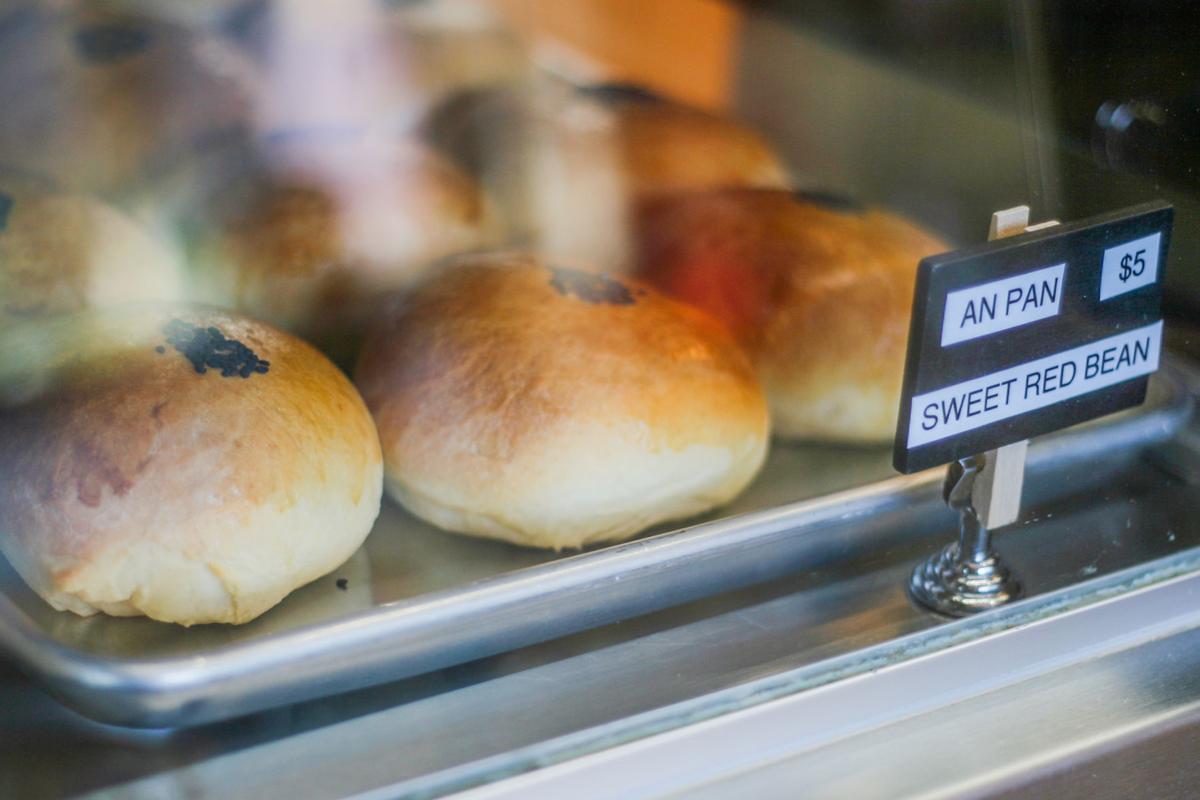 A tray of An Pan, a sweet bread with a red bean filling, sits in Oishi Bakery just minutes prior to its noon opening time. 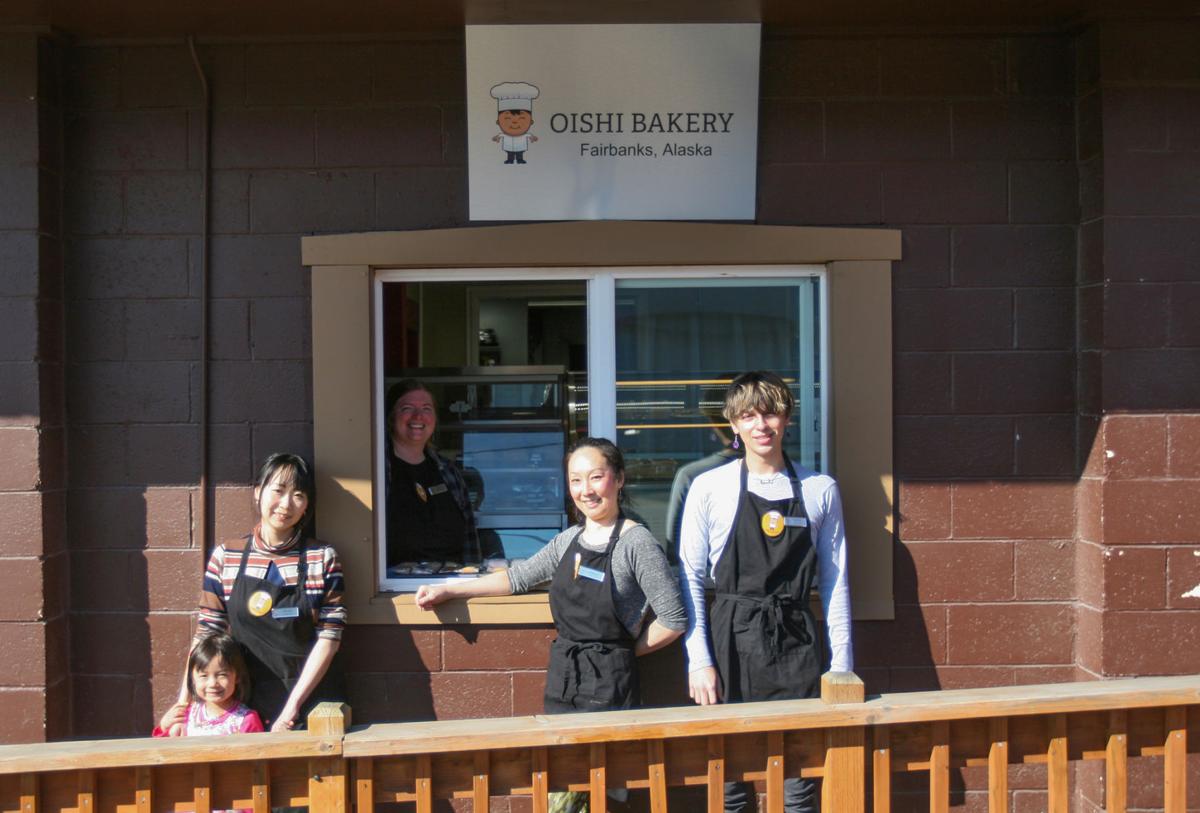 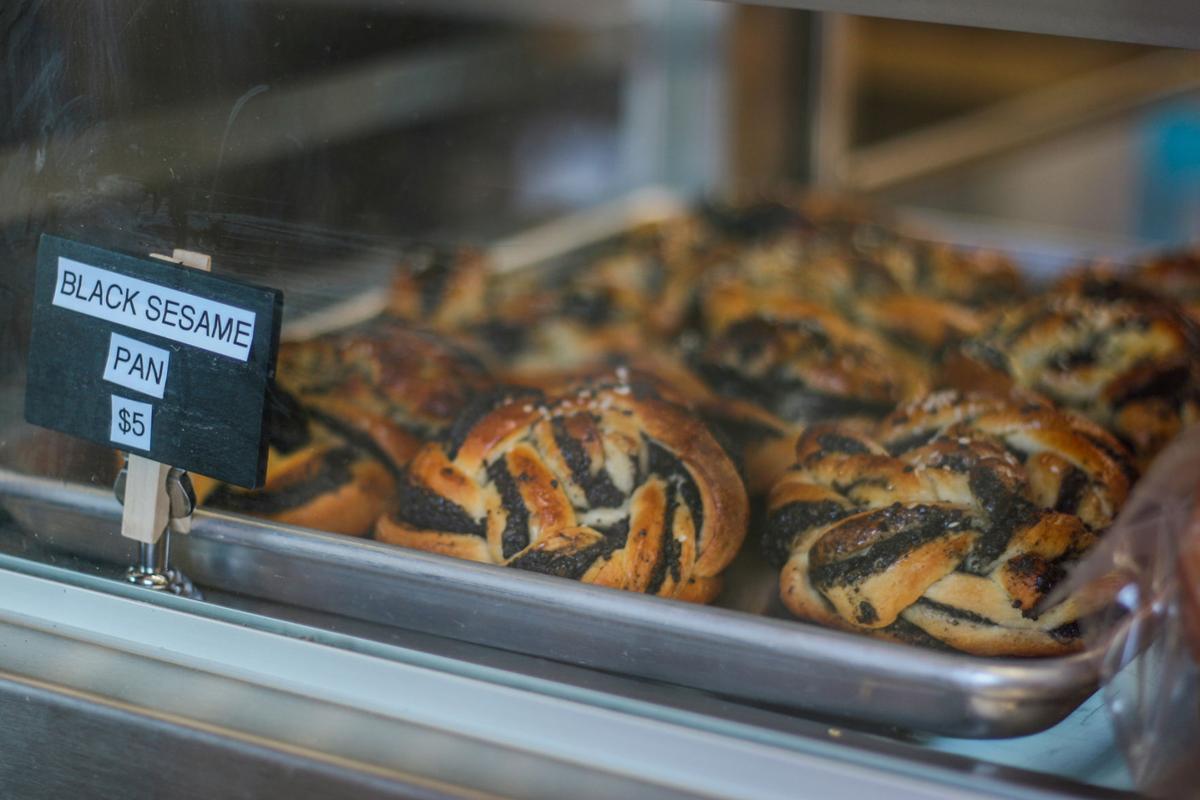 Among the items on Oishi's menu is Black Sesame Pan. The bakery sells a variety of both sweet and savory baked goods, as well as kombucha.

A tray of An Pan, a sweet bread with a red bean filling, sits in Oishi Bakery just minutes prior to its noon opening time.

Among the items on Oishi's menu is Black Sesame Pan. The bakery sells a variety of both sweet and savory baked goods, as well as kombucha.

It is an understatement to say that, since moving to Fairbanks in 2013, Shelly Jensen has been busy. Shortly after arriving she started Aerial Yoga of Alaska, a company that pioneered the aerial silks exercise business in Fairbanks. In the fall of 2018, she turned a kombucha hobby into another business, converting a basement kitchen in her Chena Ridge home into a fermentation factory and incorporating Mama Bear’s Kombucha. It seemed inevitable that more would follow.

“I’ve had a Japanese bakery on my radar for at least the last five years or so,” Jensen said in an interview with the Fairbanks Daily News-Miner on Friday. “The name Oishi Bakery has been around for a while.”

Jensen said she’s been baking all of her life, and when she was younger it was a way to bond with her mother.

“She wasn’t a very good chef, but she was a great baker,” she said. “So we’d bake together. It just gives me a good feeling, just nostalgia-wise, you know?”

Oishi, which translates to the word “delicious” or “tasty” in English, began its life roughly a year ago. Jensen started just by selling sweet baked goods from an outlet in Pioneer Park during the summer of 2019. In August, she moved the shop to its current location at 206 Driveway Street with the intention of selling baked goods and Mama Bear’s Kombucha.

“We were initially looking for a spot for Kombucha so we could dispense it, but I knew that kombucha by itself wouldn’t be sustainable,” she said. “And I’ve always wanted to have an Asian bakery available in town. And there was none. No one was doing it, so I figured I’d just do it.”

While work was still being done on the building, Jensen held a soft opening in December, announcing she would start by selling only kombucha. In February, the bakery opened and it now sells a variety of Japanese sweet and savory breads and baked goods. Beyond Jensen, Oishi has three employees: Ayumi Bakken, Mallory Smith and Kazuo Jafre.

Jensen said that the Miso Pork Belly Pan is likely the most popular item. It’s a soft bread bun with a savory, salty pork filling. Jensen said that a lot of people find it reminiscent of Nikuman, which is a Japanese spin on Chinese steamed buns. It’s also one of the few Japanese items on the menu that you would likely struggle to find in Japan.

“It’s very original to this shop,” Jensen said, before gesturing to Jafre, Oishi’s head baker. “We use abura miso, which is a recipe from his grandma from Okinawa.”

“Finding any Okinawan food anywhere, even in Japan, but especially in America, is really hard,” Jafre said.

Kazuo Jafre, who previously worked at Venue, began baking at Oishi in February.

“I met her at Pioneer Park, and I was like, ‘Oh, Japanese baked goods. That’s like, up my alley!’” he said.

Jensen went on to describe the complicated process of constructing the Miso Pork Belly Pan, before concluding: “It’s quite intense in terms of the work we put into it. Everything we make here is 100% from scratch.”

As Jensen continued to explain other items from the menu, it became apparent that most of the items are pretty labor intensive and the Oishi staff don’t cut corners.

For example, among the sweet breads on offer is An Pan, a red bean paste-filled bun. Jensen said that a mixture of organic red beans, sugar and salt is boiled “for days” before it reduces down to the desired paste.

Likewise the process of putting together the Black Sesame Swiss Roll is elaborate: “We toast the black sesame first, and puree it and then add some honey, make it into a paste and weave it into the bread.”

“I don’t want to just go to the store and buy a box of brownie mix and put it in the oven. That doesn’t excite me at all,” Jensen said. “It’s the same with Kazou. He’s the head baker here and he likes very complex recipes. For example, with this roll cake. We used egg whites to make a meringue and that’s what makes it fluffy, not baking powder.”

Some of the items on offer demonstrate a clear Alaska influence. Although the cream flavor varies weekly, you’ll currently find Alaskan low-bush cranberries in the lingonberry cream inside the matcha swiss roll. Jensen also proudly pointed out other locally-sourced ingredients, including the eggs in the Cream Pan.

“Kewpie mayonnaise is a Japanese mayonnaise and it’s very good. It’s very different from other mayo that you can find here,” Jensen Said. “They focus more on umami, which is true of a lot of Japanese cuisine.”

Another of the more popular items on the menu is the Cheesecake Souffle, which Jensen noted is more “aerated than most cheesecakes that you would find in the U.S.

“The flavor is very rich, but it’s not heavy like New York cheesecake,” she said. “It’s very common in Japan to see something like this at a bakery.”

“We never make anything too sweet,” she continued. “That’s one thing I hate about the snacks that we get in America. Everything is too sweet. It’s hard to enjoy something that’s just sugar.”

The menu also features a plethora of sweet snacks that are all made in house. As is true of most of the items on the menu, they are all gluten-free. These include various cookies, like madeleines, financiers, homemade marshmallows with Alaska raspberry and blueberry, and a Coconut Butter Mochi.

“This one is not very traditionally Japanese,” Jensen said, pointing to the mochi. “These others you would see in Japan. This one is more Hawaiian-Japanese.”

Jensen then brought out a plate of okonomiyaki, a savory pancake with cabbage and egg covered in bonito and okonomiyaki sauce, ginger and various other flavors. It had been prepared by Mallory Smith and Jensen was keen to ensure I took a mouthful with each flavor present.

“There you go. The ginger is the key. It ties everything together,” she said. “We like to make everything look pretty too. We take great pride in making things look pretty. It’s one thing to taste good, but it’s another thing to visually please your brain too. And when everything matches, I think it's magical.”

At the moment, due to the ongoing coronavirus outbreak, Oishi is selling its goods via window service only. Jensen notes that opening in February only to close the next month was tough, but it would have been harder to grind to a halt after being in business for years.

“I wouldn’t say it’s been easy, but because we’re a new business we have a little wiggle room to adapt,” she said. “All we can do is be, so we’ve adapted by making it curbside and window pick-up. The customers have been receiving it very positively. So I’m fortunate that a lot of people have been understanding.”

“I just keep going. Because that’s all we can do,” she added.

Oishi Bakery is located at 206 Driveway Street and is open noon to 6 p.m. Tuesday through Saturday. You can find the menu on the bakery’s website at bit.ly/2WmBj3U.