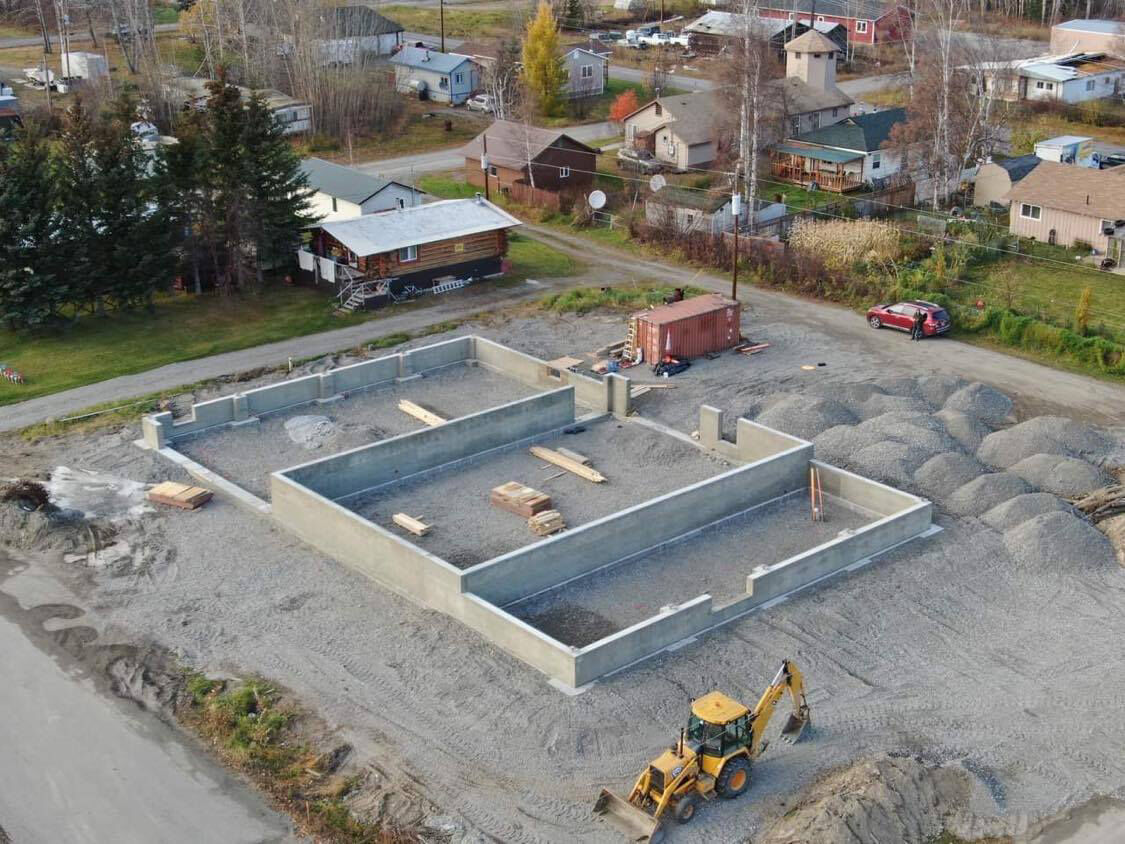 The foundation walls for the biomass project in Nenana went up only days before the season's first snowfall in October. 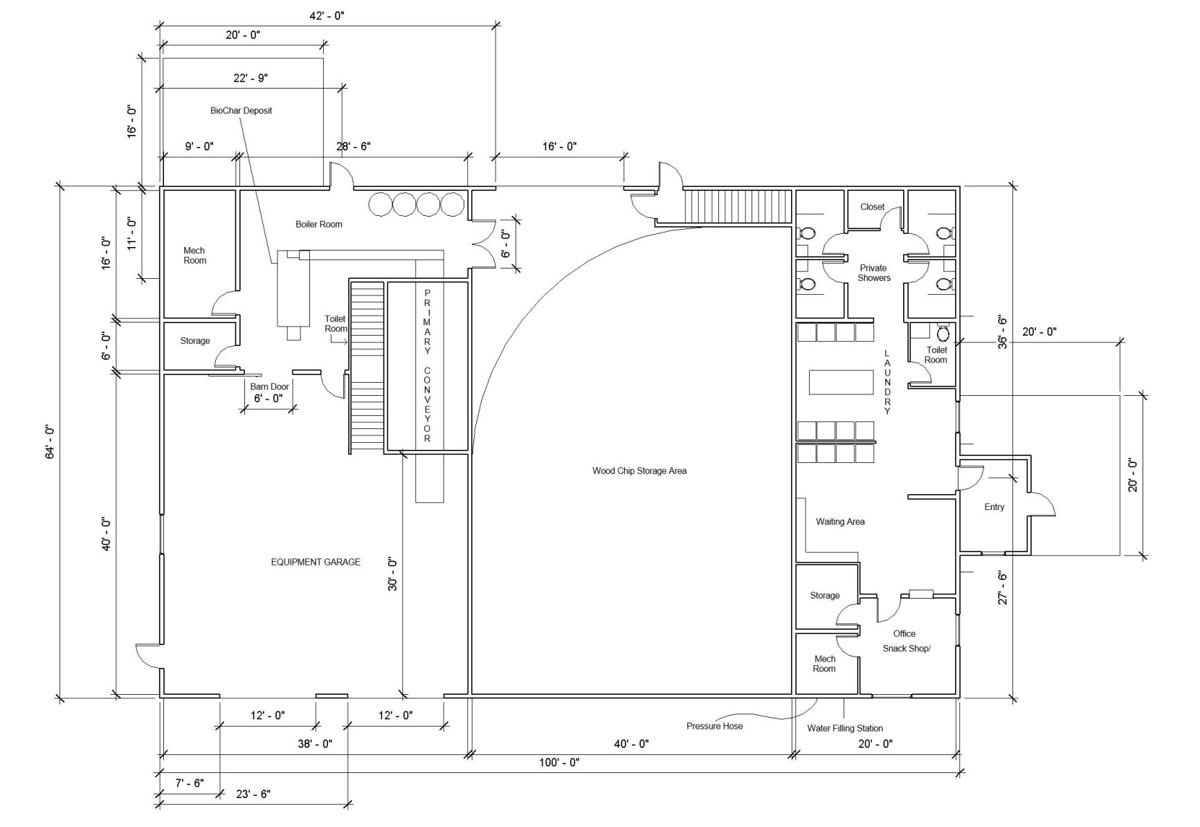 The foundation walls for the biomass project in Nenana went up only days before the season's first snowfall in October.

Some big changes are on the way for the small city of Nenana. This fall, the foundation for a 100-foot by 64-foot building was installed across the street from the Nenana City School. It is a first step toward a biomass plant that will provide heat for the school, the city water treatment plant and fire station, as well as a planned washeteria facility, according to Nenana Mayor Josh Verhagen.

“We’re pretty excited about it and think it will be a pretty good fit for the community,” he said.

The idea was first broached when oil prices climbed between 2008 and 2010, Verhagen said. Rex Goolsby, who spearheaded a biomass project for the Tok School District, talked to Nenana’s City Council about a similar project, but the timing wasn’t right, Verhagen said.

When the topic was brought up more recently, Verhagen said the council was unanimously in favor of the project, so he got to work.

Biomass energy systems, which use waste wood and brush — an environmentally friendly and renewable source of energy — have become more popular and more efficient in the past decade. In most of Alaska, there is no centralized power grid and hundreds of communities are responsible for generating their own power, creating a mosaic of microgrids across the state. Most villages use diesel generators as their main source of energy, but alternative energy sources such as wind, solar and woody biomass systems are increasingly common. Goolsby has worked with a number of villages, including Tok and Mentasta, to install biomass facilities.

Tok, which went online a decade ago, was a trailblazer, said Goolsby, a longtime general contractor who now divides his time between Alaska and Missouri.

“I’ve built a lot of these things,” Goolsby said. “Through my connection to the Tok plant, we learned an awful lot.

We got in business with a lot of really talented people on that thing. There’s some world leaders in biomass energy that we rubbed shoulders with on the project. It’s been really successful.”

Three things must be in place for a biomass facility to be successful: a large amount of wood or brush for fuel and a way to transport the fuel to the boiler; a customer for the heat; and good maintenance.

For instance, Tok has a wealth of fiber resources, including big logging operations nearby, as well as 300,000 acres of standing burned timber from recent wildfires, Goolsby said.

Likewise, Nenana is home to well-equipped local contractors and can do right-of-way clearing on a large scale, Goolsby said. In addition, he said, a log home builder on the Kenai Peninsula is looking at relocating to the Nenana area, which alone would produce more fiber than needed.

As far as customers, schools are usually one of the largest buildings in Alaska communities. Like Tok, the school in Nenana is the primary customer, but heat would also go to the city’s fire department and water treatment plant, which today uses a lot of fuel, Verhagen said. Because there’s so much iron in the city’s water, it must be heated to 52 degrees before the iron can be removed, and the building itself must be heated.

Maintenance can be a major problem in some villages, Goolsby said, noting that he’s helped install biomass systems in some villages that haven’t worked as well as he’d like.

“It’s not like a diesel system,” he said. “(Biomass boilers) need lots and lots of love and care and devotion. You can’t just leave them alone. It takes some good, talented people — they have those in the city of Nenana.”

Startup costs are another hurdle.

While Verhagen initially hoped to self-fund the project, which will cost an estimated $1.17 million, he and Jaret Laurence, Nenana’s public works and airport manager, are instead looking for grants to cover engineering and design and other pieces of the project.

The payoff will be a huge offset in diesel costs. Laurence estimates that the city will offset 36,300 gallons of heating fuel over a five-month period. The BET 24-S boiler itself cost $97,000 and is en route from the Biomass Energy Techniques in Versailles, Missouri. It will put out 1.4 million BTUs per hour and can burn wood, brush, cardboard, all readily available locally. A gallon of diesel provides 138,600 BTUs per hour.

The biomass boiler is expected to replace 70% to 80% of the existing demand in city facilities, reducing overall costs by 65% to 85%, Verhagen said.

Verhagen said the boiler can handle a huge variety of clean material with a moisture content as high as 65%.

“It’s more like an incinerator and it’s got the flexibility to get all types of wood,” he said. “It burns at 2,600 degrees. You can get wood that was cut yesterday and burn it today with practically zero emissions.”

That flexibility lowers the boiler’s overall efficiency, but Verhagen said it means they won’t ever run out of fuel during a cold spell.

“They’re not easy to maintain,” Verhagen said. “They’re finicky and you have to baby them, so you want the most flexibility you can get.”

There’s plenty of fuel available. The city of Nenana covers 5.5 square miles and the new bridge over the Nenana River opens up thousands of acres to the west for potential agricultural use. The boiler also produces a byproduct, called biochar, that is an excellent soil amendment, he said. Another byproduct is an aggregate used in making lightweight concrete.

Verhagen is envisioning a system in which people who are clearing land for agriculture can trade wood for biochar.

The building itself, which will be made with a steel superstructure covered by insulated panels, covers most of three city lots and is being built to last.

“It’s the most skookum foundation this city has ever seen,” Verhagen said. “This building is never going to move.”

He is also planning a washeteria at the site, with washers and dryers and showers for the community. The dryers will be hydronic, using excess heat instead of electricity. It just so happens that Nenana’s only laundromat shut down in February, so the facility is important for the community, he said.

Laurence and Verhagen have been working with the Alaska Energy Authority for funding and project advice and have applied for several grants.

“We want to get on the Legislature’s radar and anyone else who can help us find the money,” Laurence said. “We would like to have the building operational by October of next year.”

The community is excited about the project, Verhagen said.

“The most rewarding part of the job is to see the difference we’re making in the community,” he said.