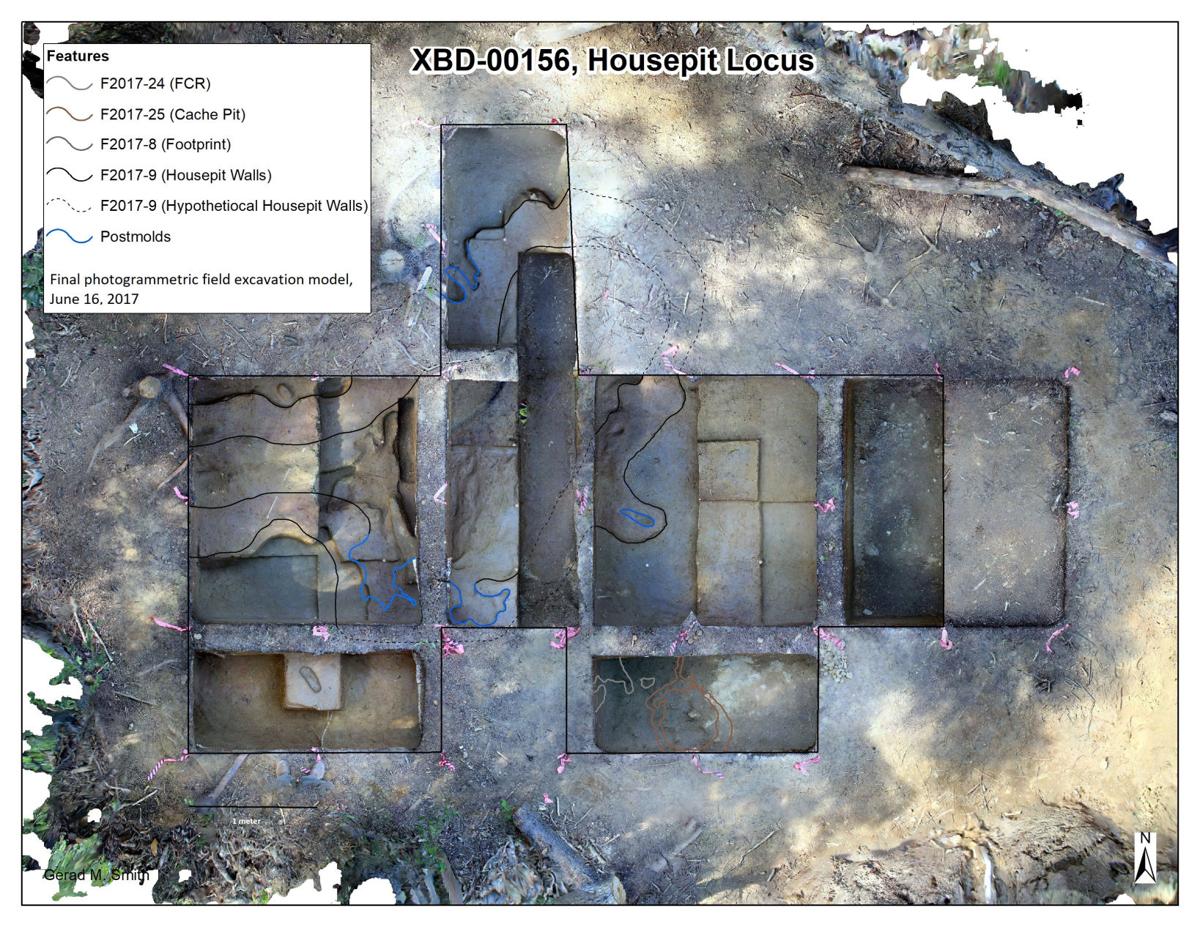 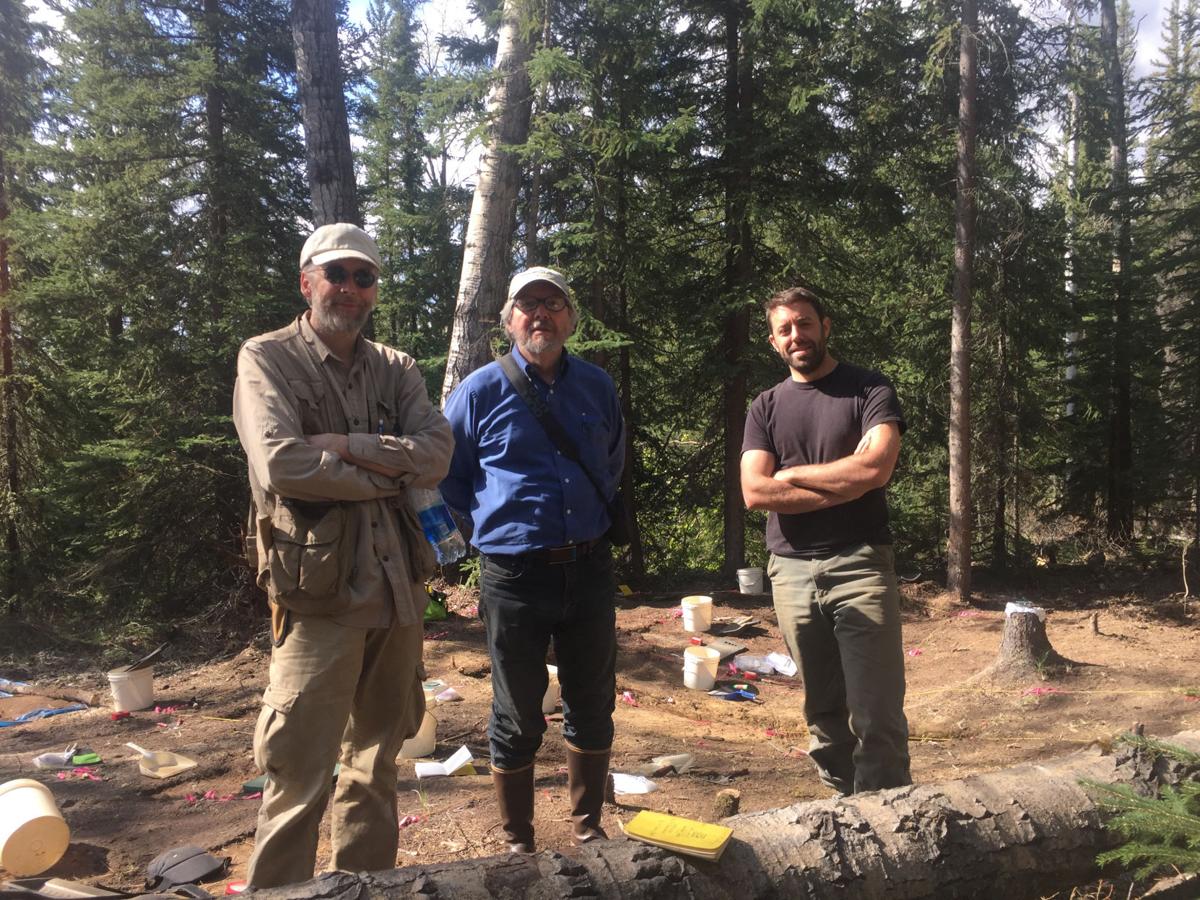 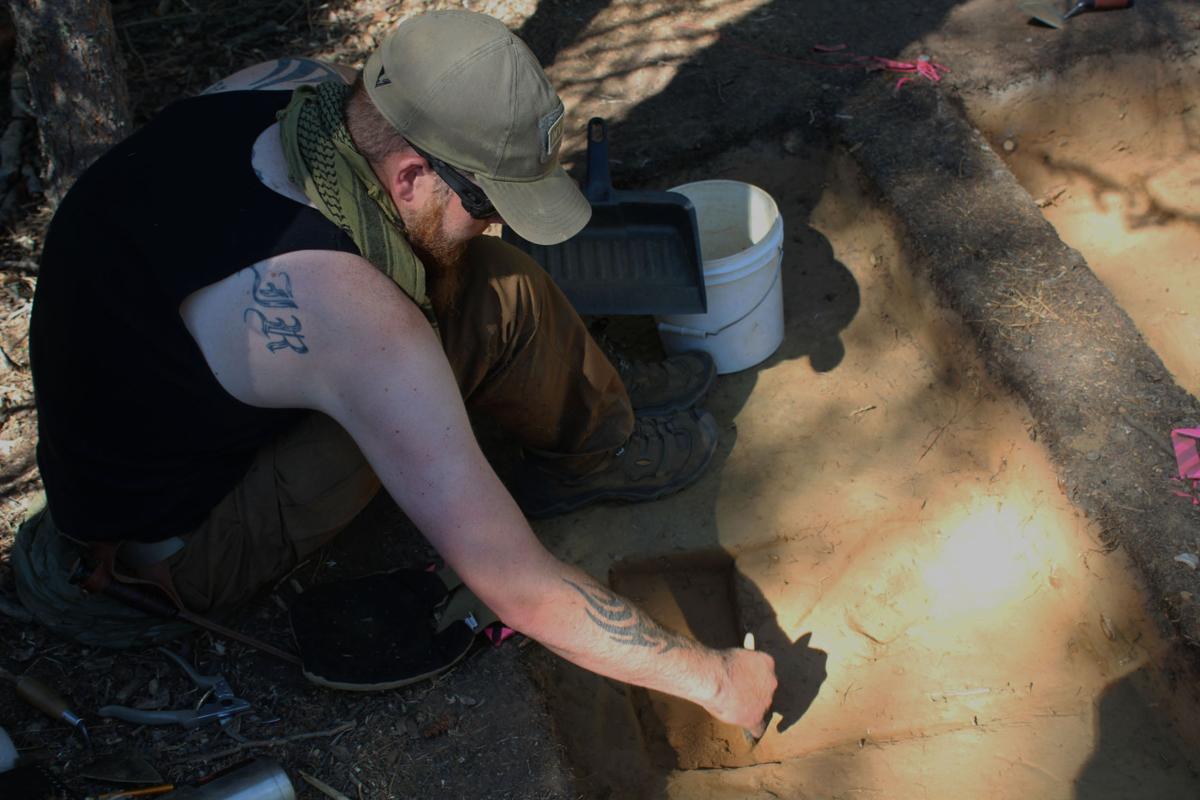 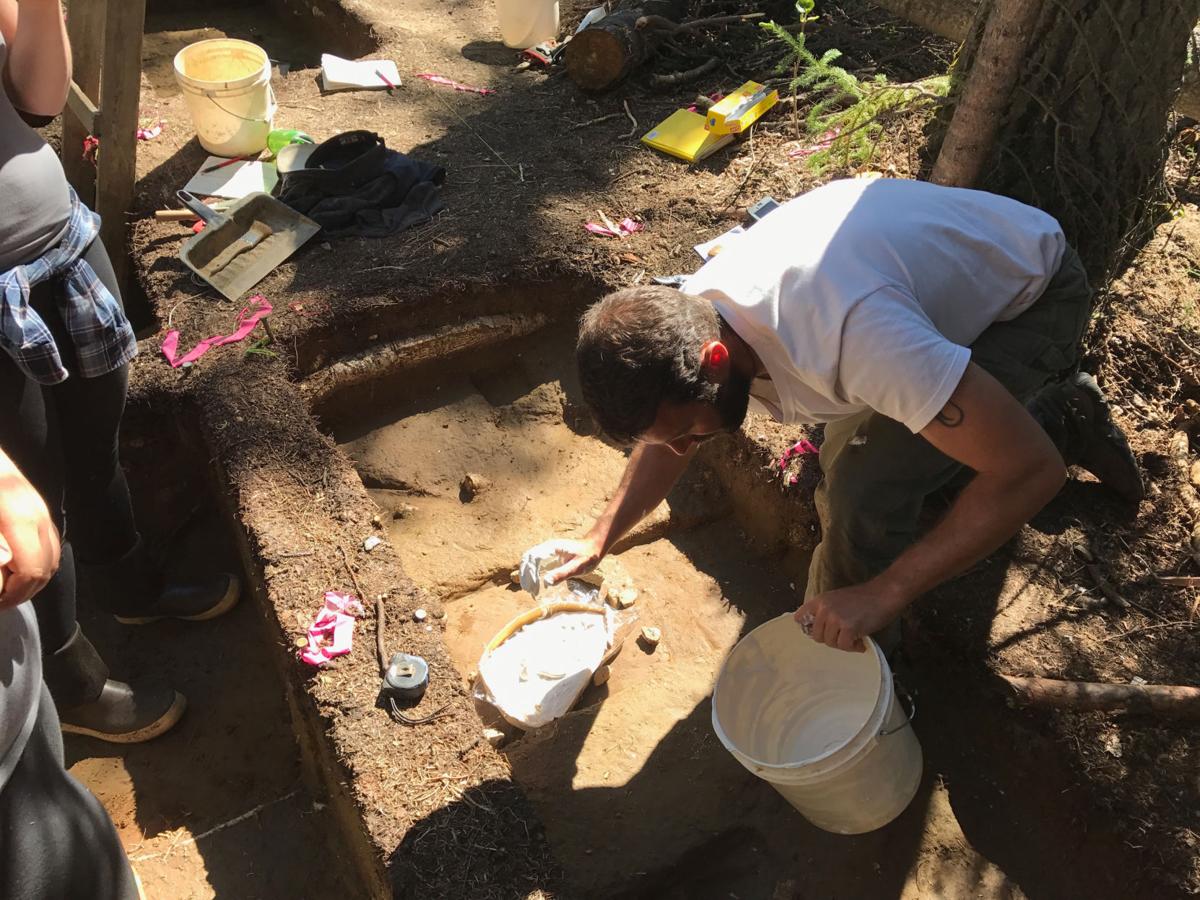 Gerad Smith creates a plaster cast of the footprint feature. 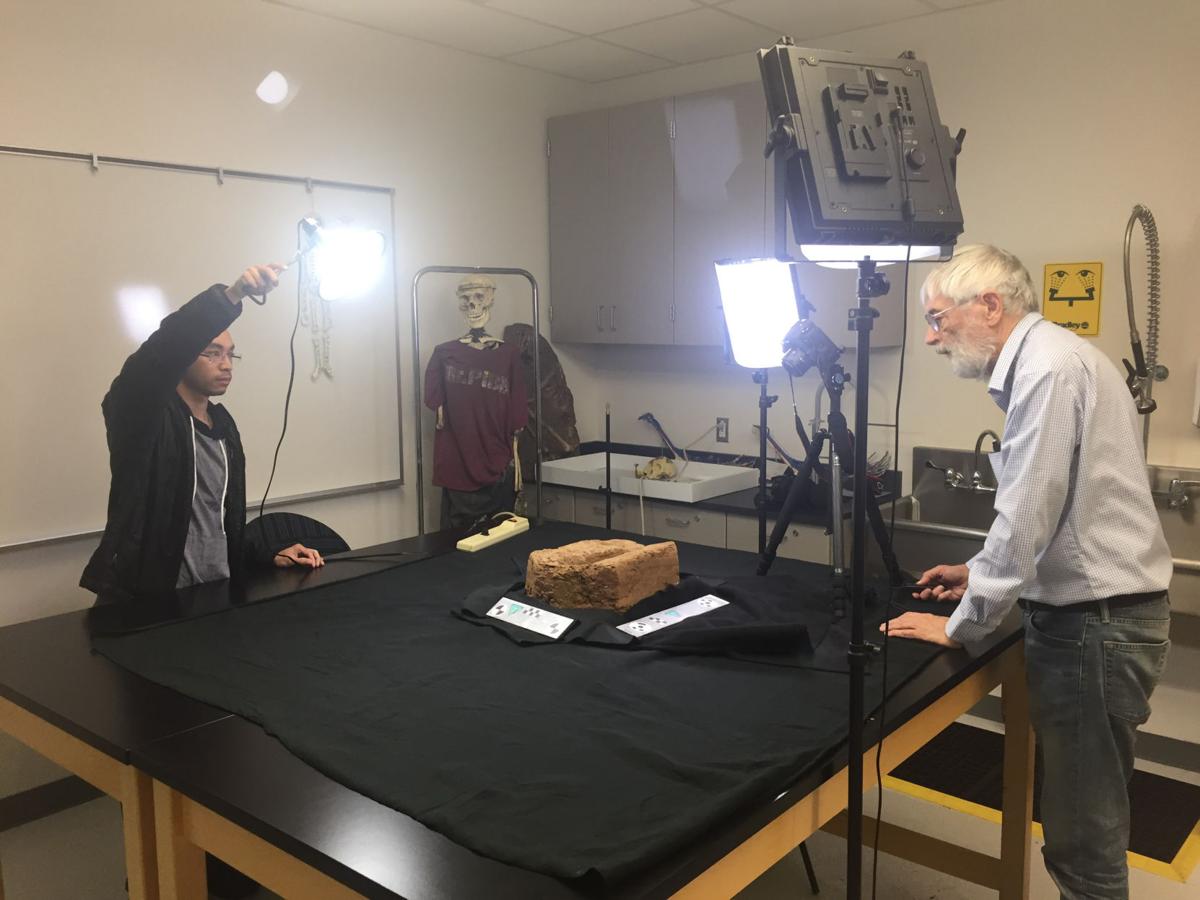 A team of archaeologists with the University of Alaska has discovered a footprint at a site in the Interior, providing evidence of prehistoric family life in the area.

“This is the only human footprint that has been found in the North American subarctic anywhere,” said Gerad Smith, a doctoral candidate working at the site, “and that includes Canada also.”

Smith and the other researchers recently published the finding in the Journal of Archaeological Science: Reports.

He is the instructor of record at Swan Point, an archaeological site near Big Delta. Reaching the area requires passing through a bog, but once there, he said, it’s a wide space from which the Alaska Range is visible to the south.

Swan Point was discovered by Charles Holmes, an affiliate research professor with UAF, in the early 1990s. Initially, he and the students who discovered it found lithic artifacts, or stone tools, indicating human activity.

“The site has a very long record of human activity there starting 14,000 years ago,” Holmes said. “So we can see a lot of the environmental changes that took place over that time. And we can see how the people changed their toolkit in adapting to the changes.”

Smith has noticed that finding the footprint seems to get a different response than when they discover tools or bone scraps.

“There’s something kind of cool about footprints that strikes us in a very personal way,” he said.

In 2005, according to Smith, three surface features in the area were tested to see if it had a cultural origin, and it looked like it might have been an ancient house.

Smith first came to Swan Point in 2012, when Holmes was looking for graduate students to help with work in the area.

The footprint was discovered in 2017 by a UAA student, Steve Schoenhair, by carefully plotting out the area with the house and digging through the layers of sediment.

When they initially saw it, Smith said he knew “we were really going to have to work hard to prove it was a human footprint.”

Holmes, who was at the site upon the discovery, agreed.

“I think it’s very interesting,” he said. “At the time I was a bit skeptical on how we were going to really show that it was a real human footprint.”

However, given the measurements Smith took, Holmes said people believe the footprint is that of a human.

Using carbon dating, Smith and the team concluded the footprint was left around 1,840 years ago. By measuring the ball of the foot, then comparing it to the length, they were able to create a biological profile of the walker, who they believe would have been a pre-teen child.

“Statistically speaking, when footprints are this small, they tend to match children that are about 8 to 11 years old,” Smith said.

Smith said he also conducted a comprehensive literature review to confirm this is the only print that has been found thus far in the North American subarctic. The metrics of the print, according to Smith, match tracks left in Jaguar Caves, Tennessee, where prehistoric adolescents are also believed to have visited.

The data gathered on the print has allowed the team to date it and determine the approximate age of the person who left it, although some things remain a mystery.

“I always wonder why there’s just one of something,” Holmes said, laughing. “One single footprint, OK. There’s a story behind that, I suppose.”

The team was able to create a model of the footprint using a process known as photogrammetry. Using multiple pictures taken around the entirety of the print, Ted Parsons, a graduate student with UAA, was able to make a digital model. Smith also plastered the print to create a cast of it.

The whole excavation is part of a large project in the Shaw Creek area, looking at how humans in prehistoric times adapted to the environment and, vice versa, how human presence impacted the environment.

“What we’re doing now is we’ve been working on a long-term project looking at a particular region around the Shaw Creek area, and this is where Swan Point is located,” Holmes said.

Joshua Reuther, curator of archaeology at the UAF Museum of the North, has been working with Holmes and the other archaeologists on the project. Reuther initially worked in the area under Holmes as a geology student. Now he is a co-principal investigator.

“My role has always been trying to establish what the environment was like and the landscape was like over that 14,000 years that humans have been out there using plant and animal resources,” Reuther said.

He explained some of the research in Swan Point has involved taking lake cores, examining the sediment in the area and some other geological work determining what the landscape looked like at different times.

One interesting aspect of the changing environment Reuther notes is the change in staple foods. Moose and salmon, for example, are considered staple Interior foods, he said, but going back a few thousand years bison and elk would have been abundant in the area.

The presence of these animals, Reuther noted, can explain the human presence.

“So if you think about an archaeology site you can have several periods where people occupy the same landform,” he said. “And they can be doing the same thing like just hunting, or they could be hunting and camping or they could set up a home there.”

The prehistoric home with the footprint inside of it is just one part of the whole area, which continues to be explored and excavated.

Smith was able to remove the footprint from the site and preserve it. It is in Anchorage but will be brought back to the Interior.

“Eventually, when we are done with this project, it will be curated at the Museum of the North in Fairbanks,” he said.