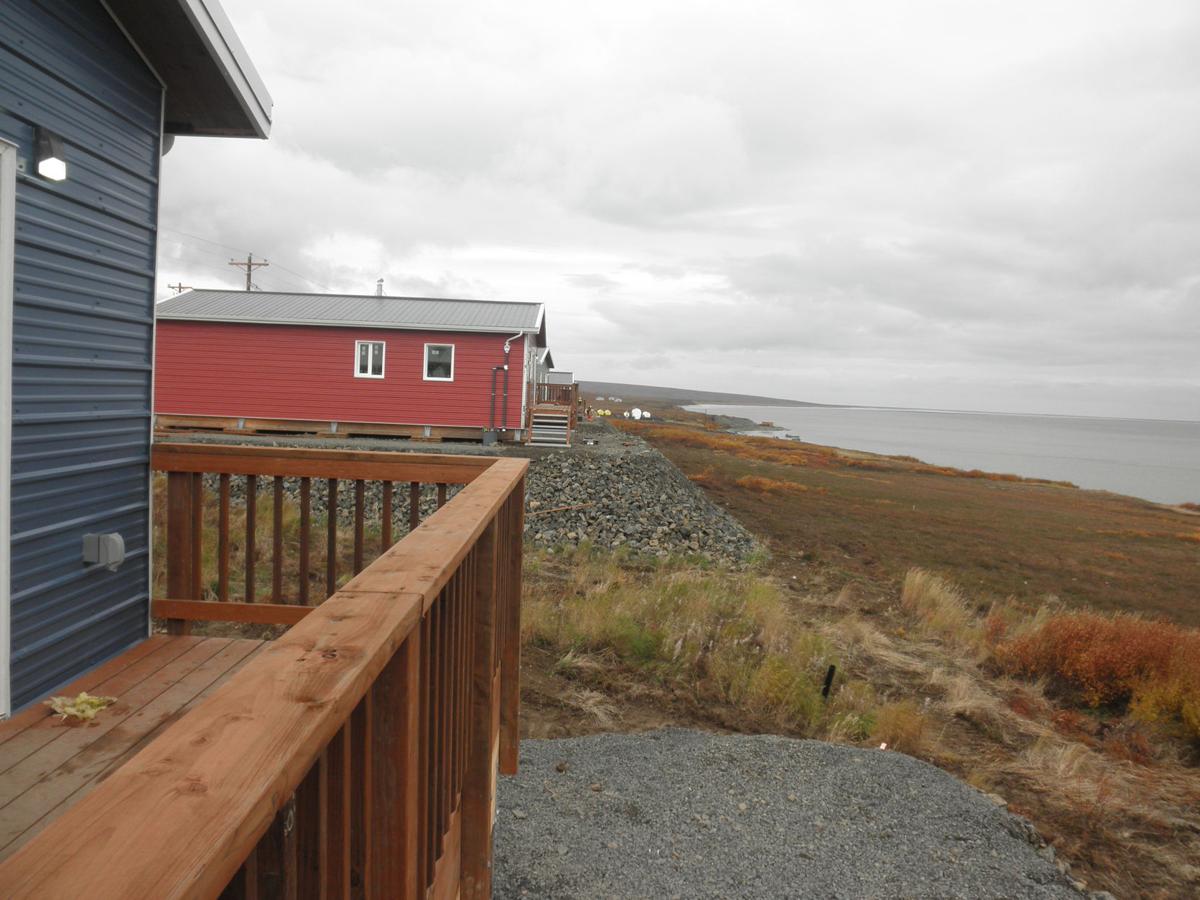 Freshly build homes in Mertarvik look out over the bay toward Newtok. These houses were designed in part by the Cold Climate Housing Research Center.

Newly built homes in Newtok's new location of Mertarvik sit on the hillside awaiting a group of families who are set to move into the homes as soon as this weekend. 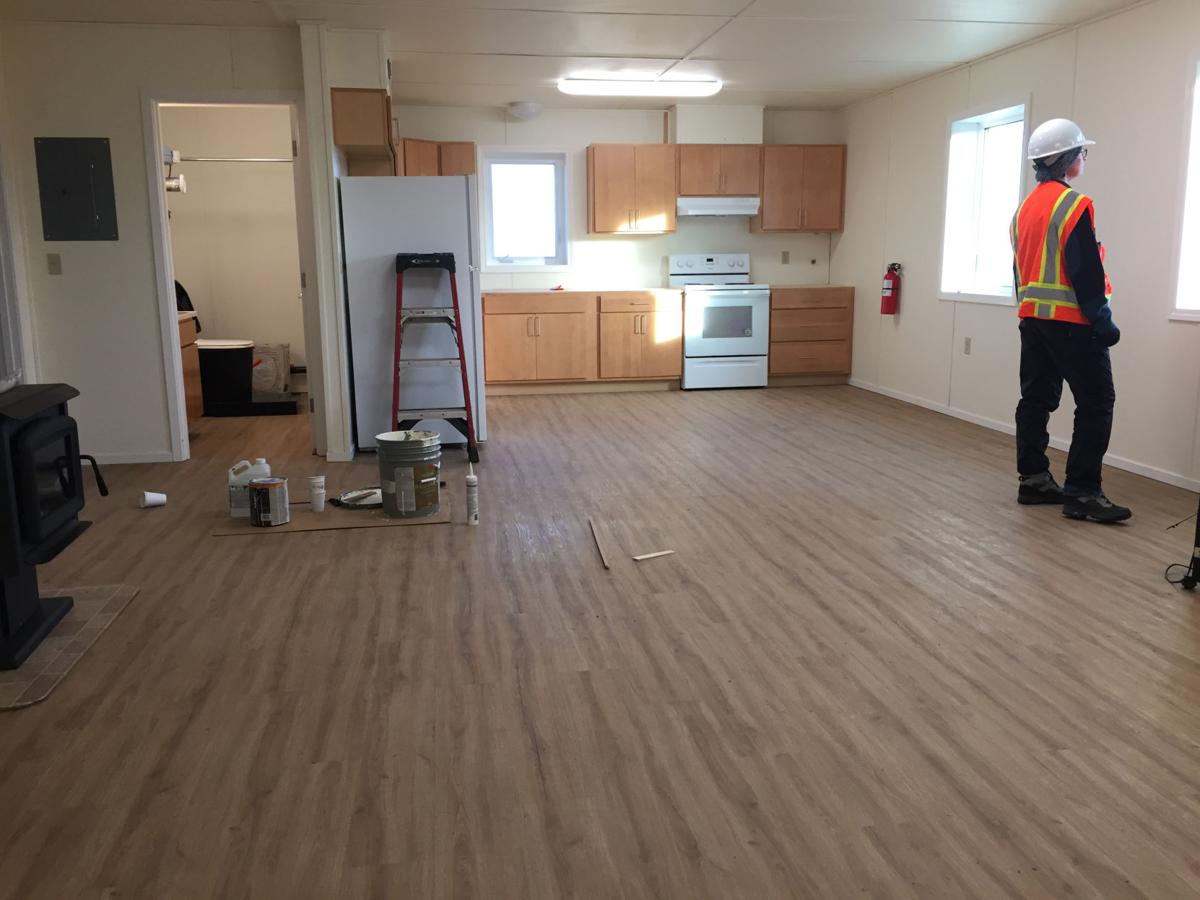 The homes in Mertarvik, designed by the Cold Climate Housing Research Center, are near completion and ready for the first wave of families to move from Newtok."

Freshly build homes in Mertarvik look out over the bay toward Newtok. These houses were designed in part by the Cold Climate Housing Research Center.

Newly built homes in Newtok's new location of Mertarvik sit on the hillside awaiting a group of families who are set to move into the homes as soon as this weekend.

The homes in Mertarvik, designed by the Cold Climate Housing Research Center, are near completion and ready for the first wave of families to move from Newtok."

In a significant step for a village plagued by the effects of climate change, the first wave of families is set to move from the Southwest community of Newtok across the Baird Inlet to its new location of Mertarvik this weekend.

The move has been a long time in the making and has taken extensive planning, according to Aaron Cooke, an architect with the Cold Climate Housing Research Center, which has helped in the design and research for the some of the new homes in Mertarvik. The center is located at the University of Alaska Fairbanks.

The CCHRC has designed 13 homes in the new community site, Cooke said. With the other homes already built plus additional structures, there will be a total of 22 homes available for occupancy this season.

A group of up to nine families is set to move as soon as this weekend.

The combined effort between the CCHRC, the Association of Village Council Presidents Regional Housing Authority, the Alaska Native Tribal Health Consortium, contractor teams and others means residents of Newtok will be able to begin life in Mertarvik after a period of stressful uncertainty.

“It’s been a long time coming, there’s been a lot of planning, so these are finally the first folks taking the plunge,” Cooke said.

These are families who have already lost their homes and have been sleeping at the Newtok school.

As the shoreline gained on the homes, this first wave of families to make the move agreed to have their original homes demolished to avoid the environmental hazard of the homes collapsing into the river.

Newtok has been in the process of planning for relocation for years. Located on the banks of Ningliq River, erosion has wreaked havoc on several of the homes closest to the disappearing shoreline.

The CCHRC has done extensive work in architecture and design in rural Alaska before. That is nothing new. Cooke, for example, had just returned from an action-packed tour of seven villages in seven weeks, examining previously designed structures, planning future projects and continuing education on cold climate-specific architectural design.

Helping an entire village relocate, though; that is something new.

“Villages don’t move that often, and they certainly don’t move for the reasons that Newtok is moving,” Cooke said. “That means Newtok gets a lot of attention and there are a lot of people waiting to see how this plays out.”

The center has taken a lot of care to ensure technology and architecture techniques used in the process are tried and true.

“You wouldn’t want to put 13 homes worth of untested technology in a village. That’s too big of a scale to be a guinea pig or a research project. You want tested technology. So we’re not trying anything that we haven’t already tested and proved in small one-off prototypes,” Cooke said. “Building a new village creates a golden opportunity to show how more durable and energy-efficient homes can benefit rural Alaskans.”

In an effort to craft homes to withstand the climate and weather patterns of the area, Cooke and the rest of the design team took special steps to design resilient homes with high efficiency.

“On the outside the houses look very typical. They don’t look different than what you’re used to seeing,” Cooke said. “The difference is that they’ve got 1-foot thick walls, and even thicker floors and attics.”

The houses contain extra levels of insulation and are tightly sealed to avoid moisture collection.

“They are also structurally suited to one of the highest wind zones in the state. Inside those walls is a lot of wind shear resistance,” Cooke said. “They are sealed in a way that really respects the Y-K Delta’s propensity for wind-driven moisture that causes rot and mold in homes.”

Each home is equipped with two heating mechanisms — one central system and one to work as a backup. Most residents communicated a preference for wood as a backup, so many of the homes include a wood stove in addition to a main oil heater.

“If you’re married to heating fuel, your job is to make sure the house uses as little as possible because it’s expensive,” Cooke said. “Thus we went for reduced demand, making the thicker walls, building the tighter house. So we believe this should use a quarter of the annual heating oil of a similar-sized home just built to code.”

The homes also include what is called a BrHEAThe system as well, which combines heat with clean air and ventilation. The system was first tested in homes at the UAF Sustainable Village before being installed in village homes.

The CCHRC has worked in conjunction with the Newtok Village Council and a group of other construction and governance entities since 2008.

“We helped with some of the early analysis of the existing housing in Newtok. An assessment of how many people need housing,” Cooke said. “If you just count the number of houses in Newtok but don’t take into account say the overcrowding statistics in rural Alaska or the population growth factors, you might come up with the wrong number.”

Cooke said the project has been challenging but exciting.

“In the end, I consider Newtok a success story because until someone has relocated due to climatic factors like Newtok, then the discussion is hypothetical,” he said. “But the future is here for us in Alaska. We now have our first case study.”

Sorry, there are no recent results for popular articles.