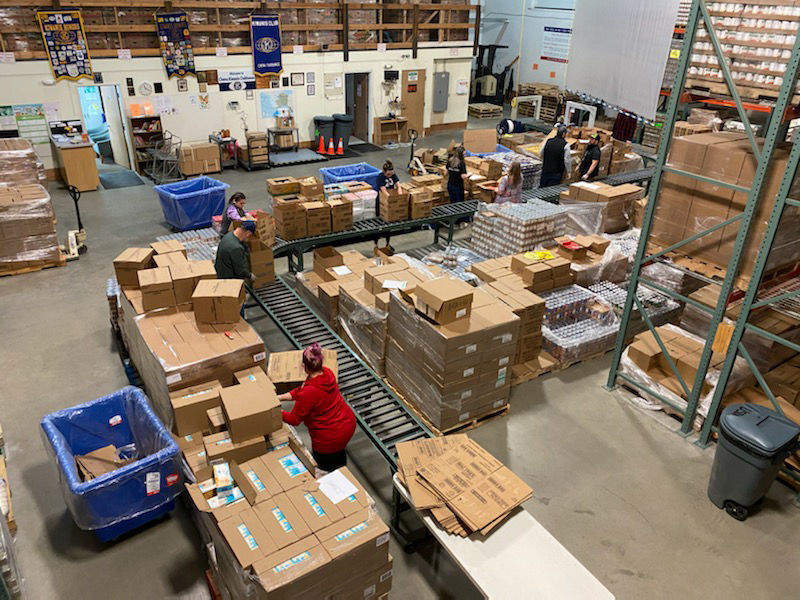 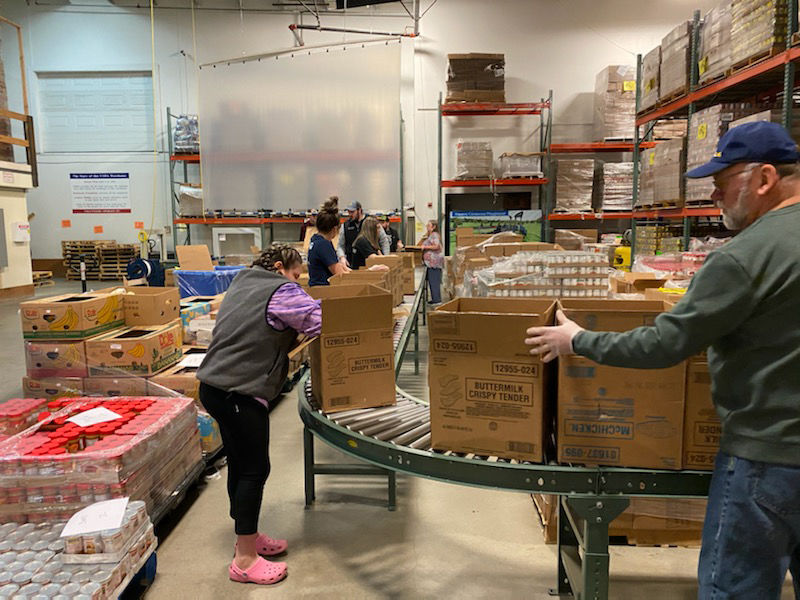 Volunteers from Truth North Church came to Fairbanks Community Food Bank on Wednesday to help pack food boxes. The Food Bank has been packing over 60 boxes a day and sending them out to distribution sites around town. Photos courtesy of Food Bank Staff

Volunteers from Truth North Church came to Fairbanks Community Food Bank on Wednesday to help pack food boxes. The Food Bank has been packing over 60 boxes a day and sending them out to distribution sites around town. Photos courtesy of Food Bank Staff

As COVID-19 concerns beset the community and requests for food have risen, the Fairbanks Community Food Bank has been working to meet hundreds of peoples’ needs.

For people who are already food insecure, the idea of not being not being allowed to leave home for two to three weeks can be terrifying, according to Food Bank CEO Anne Weaver. She added that people who normally aren’t food insecure are now having concerns about food missing on the shelves.

“So what has that meant to us? Two to three hundred calls a day in requests to us, in call volume,” she said.

For a while, the Food Bank was giving out around twice as much food as it was taking in on average, but that started to change on Monday, according to Weaver.

“When the grocery store shelves are empty, that directly impacts what they can give to us. As the grocery stores receive more stock, they’re able to have more surplus that comes our direction,” she said.

The big change now is that, when they receive their orders, the stores always have a little extra and the extra is coming to the Food Bank, according to Weaver. As of Monday, the amount of food coming in has been rising again.

“This community has been amazing with their response to COVID-19 because as things have gotten tight, they’ve taken care of each other and been donating to the Food Bank whatever they could so that we did have as much as we’ve had,” she said.

The Food Bank has been able to maintain volunteer presence despite the higher number of calls.

“When the snow hit, we were way low on volunteers. That was rough, but other than weather situations, we have almost been fully staffed on volunteers every day,” she said.

The increased requests for food means more boxes being packed by those volunteers.

They have lately been packing 68 boxes per day, according to Weaver. That’s well above the daily average of 40 boxes for this time of year.

When people call and request food boxes, which are distributed at 25 sites around town, Weaver noted they’re usually calling for households of more than one person. They’ve been able to maintain social distance while still keeping the sites open at present.

“If we miss them today, they’re usually fed tomorrow. So, people are getting their needs met, just not on the same day, which is our goal,” she said.

Weaver said people who need their food that same day usually call at 10 a.m., when the Food Bank opens up for requests over the phone.

Since the call volume is so high right now, it’s likely that callers will receive a voice message, according to Weaver, but they’ve worked on the messages to give people tips as to where they’ll be that day and ask people to still leave them a message if they need to make a request.

For people who want to donate, Weaver said there are several options.

“We’re accepting donations through our website. They can call us to give a donation or mail in a check,” she said. The Fairbanks Community Food Bank website is reachable at  www.fairbanksfoodbank.org/

People bringing food can come to the food donation door. The building is currently closed to the public.

“They’ll call 45-SHARE and we’ll come out and pick it right up from their car, from the back of their car,” Weaver said. She said donors can pop their trunk and workers will come pull the food out to limit contact.

People who are interested in volunteering and haven’t traveled and don’t live with anybody who has possibly been exposed can call 45-SHARE.

In regards to volunteers, Weaver said they’ve been careful who they let into the building. Once volunteers are on site, they practice social distancing. The Food Bank supplies hand sanitizer.

Weaver said it’s wonderful having volunteers from all walks of life choose to step up.

“So we are still going strong and I want to give a huge shout out to our staff, who haven’t missed a beat,” she said.